The raging Creek fire that has captured hundreds of campers and devastated large swaths of the Sierra is taking a devastating toll on the town of Big Creek, California.

Photos of residents and others showed numerous homes destroyed in the town of Sierra when the fire burned more than 78,000 acres. Early reports said at least two dozen homes in the city have been lost, but no official assessment was made on Monday in the burgeoning emergency. Exploding propane tanks have done further damage, said Christopher Donnelly, chief of the area's volunteer fire department.

With fewer than 200 residents, Big Creek is a popular town known to many visitors to the Sierra.

The fire trapped more than 200 hikers in the Mammoth Pool Recreation Area when it crossed the San Joaquin River on Saturday afternoon, sparking massive rescue efforts by the California National Guard.

A vehicle drives by in a long exposure as the Fresno County's Deputy Jeffery Shipman stands along State Route 168 as the creek fire draws closer to Shaver Lake.

Governor Gavin Newsom declared a state of emergency for the counties affected by the fire late on Sunday.

Duane Ruth-Heffelbower was monitoring the fire from his home in Fresno on Sunday morning, trying to compile a picture of the past 24 hours as the creek fire had grown to nearly 40,000 acres. Ruth-Heffelbower has been going to Huntington Lake for 45 years and is the manager of a church camp on the west end of the lake.

Saturday morning evacuations played a key role in allowing strike teams to come up with a property protection plan, and in the evening some backburns started that have so far kept most of the cabins that circled this part of the lake safe.

An improved water system also played a role, Donnelly said. In a neighboring area of ​​almost 40 cabins, five were lost.

Donnelly was on the north shore of Huntington Lake on Saturday when he heard sirens at 5:30 a.m. The sheriff's deputies were on their way to Big Creek, a small town about 60 houses to the west and nearly 2,000 feet below Huntington Lake.

The town, the majority of which are employees of Edison in Southern California, who owns and manages the area's hydropower plants, has been evacuated. Donnelly was in Big Creek at 6am and saw the fire – with a column of smoke rising nearly 300 meters – burning to the south.

At 7:30 am, smoke poured down Big Creek and Donnelly knew it was time to leave. The wind that blew into the valley during the night changed direction and gained speed.

Once the Creek fire reached Big Creek, it would race uphill to Huntington Lake. He recommended that the California Department of Forestry and Fire Safety commander evacuate the communities along Huntington Lake as well. Fire engines from the voluntary fire brigade drove through the areas and made the announcement to residents and holidaymakers.

Cell towers and electricity have failed in the region, so the damage will be counted later. 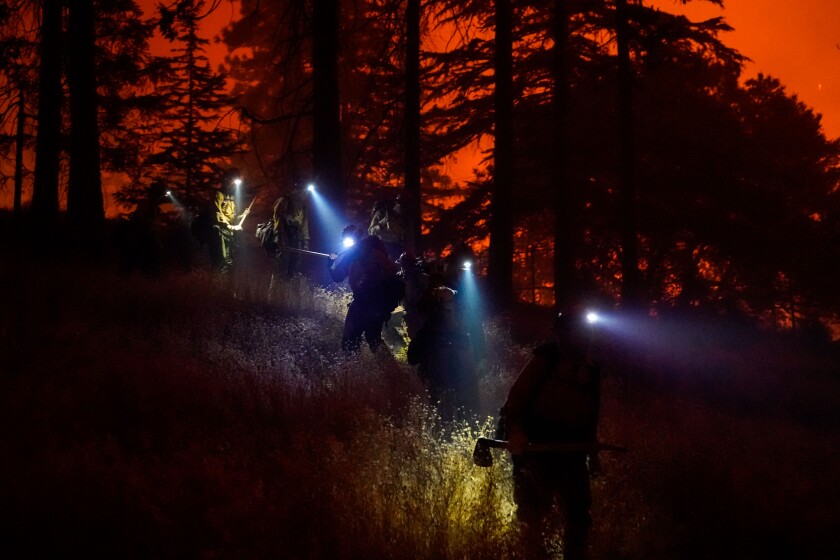 At the south fork of the San Joaquin River, the Mammoth Pool was a haven for Central Valley residents looking to escape the heatwave. It is estimated that nearly 1,000 people were camping on the site before the long weekend.

The California Air National Guard flew points in the air on Saturday evening that were caught by flames in the Mammoth Pool.

Two people suffered life-threatening injuries. They were put in the helicopters first. Then came the 19 "walking wounded" who needed hospital care but were not viewed as critical. The crews also prioritized children and those with underlying health conditions, officials said.

Some of those at Mammoth Pool described a horrific scene where they drove through flames and found shelter wherever they could.

Jeremy Remington told ABC30 that he and his family were boating when they filled their chests with ice. In less than 30 minutes, he said, the fire roared at them.

"The fire completely engulfed everything around us," he said, adding that they poured water on their shirts and used it to cover their faces as protection from smoke and heat.

"We believe there will be more rescues," said Col. Dave Hall, commander of the 40th Combat Aviation Brigade that flew the mission.

“We set up crews day and night to support possible rescue operations. The special thing about the area up there is that it is a very, very popular campsite and also a backpacking area. And because the fire is spreading very quickly, backpackers and hikers can potentially be stranded. "