Reymond Padilla, director of the Whittier Spartans Softball League, has plans to protect himself, his team and his children from COVID-19, which he is following with avid devotion.

The girls – including his 12-year-old daughter – are required to wear masks while practicing and playing. They take breaks every 30 minutes to disinfect their hands, even though they are only a few meters apart. Before agreeing to play games with other teams, he asks for a list of the COVID-19 protocols they follow. If their rules do not meet his standards, he abandons the game.

But that line of resistance fades when it comes to family.

His daughter lives in her mother's household, where uncles, nephews and other family members are invited to weekend get-togethers without masks. Padilla herself made an exception to celebrate July 4th in his sister's Simi Valley. The 42-year-old warehouse manager and his sister, a Los Angeles Police Detective, wore masks. But their children didn't.

Padilla admitted that loved ones have a “false sense of security”.

"(People feel) that just because they are home they are isolated and protected. But that's not true," he said. "You don't know where your cousin or uncle has been."

In the US, Latinos have been disproportionately high victims of the virus that has stalled parts of the world. They are roughly 39% of the population in California, but Latinos make up 60% of positive cases and 48% of deaths, according to the California Department of Health.

Reymond Padilla with his daughter Clarisa, 12.

A recent survey found that Latinos actually have more concerns about contracting the virus and being economically affected compared to other demographics. As a result, most Latinos wear masks when running errands, disinfect frequently, and stay away from large gatherings with strangers, being aware of the increased risk they face.

However, experts say family closeness, often a strength for many working-class Latino families who rely on one another to get through, can represent a rift in the armor that protects against COVID-19.

"Latino culture is a culture with the closest family units, and when everyone wears a mask (in a family house) it has a different connotation than a culture where families are not as closely connected," said April Denise Thames, Associate Professor of Psychology at USC. "It implies an element of distrust."

While large parties with young, potential “super spreaders” have attracted a lot of attention in places like the Hollywood Hills, experts say small gatherings between friends and family can be just as dangerous.

At the USC, officials found that a recent outbreak of nearly 150 infected students was spread by small groups gathering for games or unmasked study sessions, not large groups.

According to a study by researchers from the United States, China and Australia published in May and published in the BMJ Global Journal, “The transmission of COVID-19 within families and close contacts is responsible for most of the epidemic growth. Wearing community masks, hand washing, and social distancing are considered effective, but there is little evidence to educate or support community members about reducing the risk of COVID-19 in families. "

The study found that wearing masks at home was 79% effective in reducing virus spread when families wore the mask before symptoms appeared. 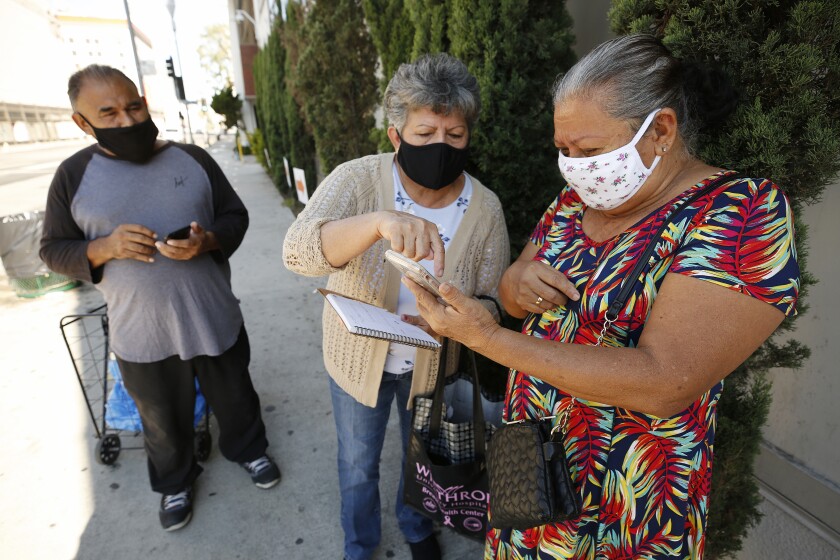 A woman in the center helps Rosa Castillo (right) and Oscar Armando Martinez prepare for COVID-19 tests at the Mexican consulate in Los Angeles.

But for many people there is a persistent perception that contracting the virus in the family is less risky, Thames said.

Latinos are no different. However, their exposure to the virus is already higher as they are over-represented in key industries – from service occupations to agriculture – where they have close contact with other people. As a result, family reunions, especially those involving people working in such professions, can be especially dangerous if precautions are not taken.

Maria Luisa Moreno, 59, said she avoided neighbors who routinely host large parties or gatherings. To protect against COVID-19, she rarely leaves home – and when she does, she makes sure to wear a protective mask and take other precautions.

"This is the only way we can stay healthy," said the resident of East Los Angeles while shopping at Target on Whittier Boulevard.

But every Sunday these precautions go out the door.

Then Moreno's five children and their spouses take turns visiting their home. She's cooking a big meal and they're sitting at the dining table. They don't wear masks.

Moreno said she felt safe in the family. The fact that one of Moreno's daughters is a medical assistant in a healthcare company that deals with patients does not detract from her sense of security under her own roof – among those she loves best.

"We have to get on with life," said Moreno.

For Padilla, there is a daily balancing act between staying healthy and protecting the mental health of his children.

"Everyone thinks about health and isolation," he said. "But we overlook what these girls are taking with them. They have their schools taken away, they have their degrees taken away. Life has changed completely for them. Now their escape from stress has also been taken away."

The family cannot cure these diseases, but it does help to manage them more easily, Padilla said.

In Boyle Heights, a neighborhood with a high rate of COVID-19 infections, Silvia Sanchez, 46, says she is so careful that she sometimes forgets to take off her mask at home. She will be doing housework in her front yard and a confused neighbor will yell, "You have your mask on! Take your mask off!"

Despite refusing to visit another family, Sanchez feels that she cannot refuse to open her doors to her sister who lives next door. When she visits us, Sanchez sometimes puts on her mask and keeps her distance. Putting on the mask under her own roof with her sister doesn't feel natural, she said.

But her sister, who has diabetes – an underlying health condition that makes her more susceptible to COVID-19 – refused to wear a mask.

"She laughs at me, but well," said Sanchez. “I prefer to be safe. You never know if the people you are with have the virus or not. " 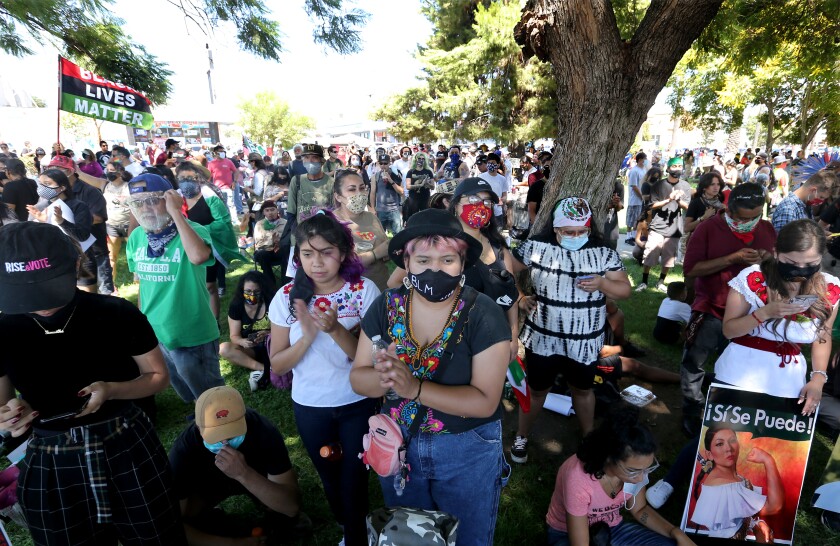 Hundreds of people gather at Ruben Salazar Park in Los Angeles in late August to commemorate the 50th anniversary of the Chicano moratorium and the death of Mexican-American journalist Ruben Salazar.

Thames said people are unlikely to wear masks in their own home. Even in your own backyard, wearing a mask can create a sense of emotional distancing with family, she said.

"Bringing that to the level of the house where you should feel best protected … that's just not normal," she said.

Don Garcia, medical director at Clínica Monseñor Oscar A. Romero, who looks after mostly Latino patients in Boyle Heights, Pico-Union and Westlake, said one of his patients, a young woman, recently came to his office sick with the virus. When he asked where she had been, she replied that she had visited her child's father – who was also infected.

"She is positive now and lives in a one-bedroom apartment with her parents, sister, infant and one other child," he said. "So that created a very difficult situation."

Garcia said that for fear of stigma, some people visit their families without telling them they tested positive or have been around people who tested positive for the virus.

Among working-class Latinos so dependent on a sense of community, fear of exclusion from COVID-19 can be voiced, said Hernan Hernandez, director of the California Farmworker Foundation.

"When you work in the field, it's a big, huge family," he said. "You are used to eating, sharing meals, and giving each other sodas with your friends and family."

In the early days of the pandemic, working-class Latinos in Kern County's communities received two conflicting messages: one from American media urging them to seek refuge; another from Spanish-speaking media in which they saw the Mexican president and others hug, kiss and shake hands without reservation, Hernandez said.

The foundation launched awareness campaigns and Mexican officials took the pandemic seriously when Mexico recorded some of the highest casualty rates in the world. Some of the family get-togethers began to decline or become more discreet, Hernandez said.

But he said as the number of infections slowly declined in parts of California, many people let go of their guard. Hernandez said in the neighborhood that he saw parking lots and streets that were full when people gathered again.

People will sit outside in their courtyards having a coffee or a carne asada grill, Hernandez said.

"We're starting to see these guidelines erosion," he said. "It's like a deadly cocktail."

Ana Cumplido, a 34-year-old retail resident, said that when her mother visits her home, she doesn't wear a mask. Cumplido said she couldn't get her mother to do it. and she relies on them for affordable childcare while she runs errands.

Her mother has diabetes and also has regular contact with other family members without a mask. Cumplido said she was not only worried about her mother, but also about her own children who could potentially get infected from her grandmother.

Even so, the family tries to keep their distance and wear a mask outside the home. They greet each other with air hugs.

But when Cumplido's grandmother visits her, she always really hugs each other. And there is no denying that they are.