In early spring, before the coronavirus shut down, Los Angeles County Health Director Barbara Ferrer met with an influential group of philanthropic and civic leaders to predict the impending crisis.

Members of the group, called the Civic Alliance, have seen dire effects on the "low-income and marginalized color communities" that are at the center of their work, said Fred Ali, president and chief executive officer of the Weingart Foundation.

"We suspected that the impact of this crisis on the communities we care about most would be disproportionate," said Ali.

There is no return to a system that is over-police, over-incarcerated and underserved.

"No Going Back," a report on racial inequality in Los Angeles

That warning sparked months of Friday's Zoom meetings, attended by representatives of major nonprofits, officials, and scientists from UCLA and USC. Her investigation started with a focus on recovery from COVID and now encompassed everything Los Angeles suffers from a racism perspective.

"The return to Los Angeles of the past is not progress," said a report released on Wednesday. "We propose dismantling these structures and prioritizing how resources are used to achieve a more responsible Los Angeles fueled by outcomes that focus on racial justice."

People on a motorway ramp during a protest against the Dijon Kizzee murder.

The report, a novel and heavily footnoted volume entitled “No Going Back”, is partly an academic treatise and partly a manifesto that paints a dark picture of racial and economic inequality and recommends a comprehensive overhaul of the systems for which it is responsible.

In 15 chapters, supported by dozens of diagrams and numerous bullet points, "No Going Back" documents inequalities in almost all aspects of public life and offers recipes that might have seemed unthinkable months before a deadly pandemic and Public outrage came over the US Police killings of black people forced a rethink of what could be imagined.

The recommendations range from general: "Apply a racist justice lens to all budget decisions" to specific and radical: "Lower the voting age to 16 in local elections".

The report proposes increasing public spending on rent subsidies, housing, mental health and youth welfare through measures such as nationwide funding of health payers, subsidies for immigrants who are out of legal residence, and monetary aid for low-income workers and such who do this lost work.

It proposes the creation of a public utility to provide internet access for all and a new centralized regional agency to manage the housing provision system and the responsibility of government agencies to meet the homeless housing goals.

To pay for all of this, she is proposing a reform of the property tax system set out in Proposition 13, new property transfer taxes and an emergency loyalty agency. It also advocates a huge increase in federal support such as B. Rental vouchers according to Section 8.

The Greater LA Committee, as the group called itself, was conceived as a project to prepare for the impact of coronavirus on low-income color communities and planned to restore them. It broadened its perspective as news reports from George Floyd, Breonna Taylor and other Black people killed by police sparked a nationwide protest movement.

"Public awareness has changed," the report said. "We shouldn't have any affection for a system that has long stolen assets from communities through discrimination and redlining rather than building them through public and private investment."

While the report encompasses a panorama of solutions, each of which would represent a major endeavor, it does not list specific actions to achieve these goals.

"Much of this is about a citizen's talk," said committee member Sarah Dusseault, an agent for the Los Angeles Homeless Services Authority. “What does a brave future look like?

"Many of the medium to longer term measures really require more civic discussions, which we want to encourage with racial justice at the core and accountability at the core," said Dusseault.

The report echoes previous research into racial and ethnic pressures in Los Angeles society that erupted into past violence. 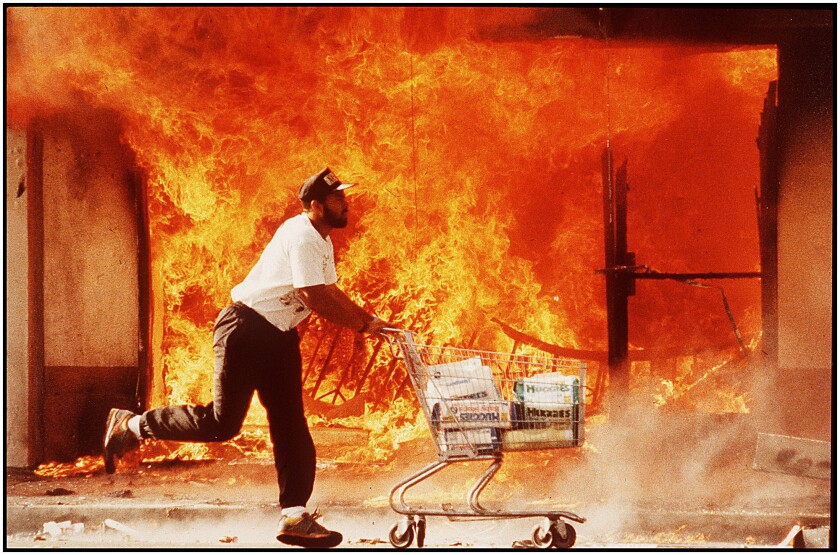 "There is no return to a system that is over-police, over-incarcerated and underserved," it said.

And more than 50 years after the Kerner Commission concluded that white racism – not black anger – was the cause of the 1965 riots in Watts, it concluded that blacks and other minorities continue to be victims of systemicism Racism evidenced by health inequalities. Income and education, and homelessness and incarceration rates.

"Police brutality is only the tip of a racist iceberg that extends to education systems, the economy and healthcare," it said.

After both events, however, “reports were drawn up and plans were put in place to deal with the underinvestment that led to the unrest – but little has fundamentally changed, especially for Black Angelenos,” the authors say. "So what could be different this time?"

They cited three factors that could make a difference this time around: "The depth of the moment" as the protests against Black Lives Matter continue, a growing realization that "the current level of inequality and racial inequality affects public health in the short term and prosperity in." threatens the US in the long term "and the growing strength of community organizations to" promote seismic change for the better, "including the 10 organizations that funded the study, including the California Community Foundation and the California Wellness Foundation.

Despite its breadth, “No Going Back” makes no attempt to prioritize its recommendations according to urgency, importance or difficulty.

"This was not intended to be a specific to-do list for each level of government," said committee chairman Miguel Santana, a former senior administrator in both the county and the city. "We hope that every candidate for office, be it mayor, councilor, congress or lawmaker, takes up the thesis that the current systems just don't work."

Santana pointed to the patchwork of costly workarounds – such as the state collecting the emergency room bill – required by excluding undocumented immigrants from welfare systems.

The report found that 18% of Los Angeles County's residents, including 200,000 children, are either undocumented or living with a family member who will disqualify them for state coronavirus aid.

"We rely on their staff when it comes to the food, the cleanliness of the facilities and the care of our children," said Santana. "We believe we should fully incorporate this sector of our society into full membership of what it means to be a Californian."

The report's conclusions are based on research by Manuel Pastor, director of the USC Equity Research Institute, and Gary Segura, dean of UCLA's Luskin School of Public Affairs, of which they were lead authors.

The two researchers and their teams attributed the current inequalities to the lack of effective reforms following the Watts Riots, a "white flight" that resulted in further segregation of South LA, the disproportionate impact of the county's de-industrialization on Black Angelenos, followed by the effects of the great recession.

When they layered these differences on the COVID-19 pandemic, they found that black and Latin American workers were far more likely than white workers to work in high-risk jobs that were classified as essential and far less likely to have a computer and high-speed internet at home You take part in schoolwork while class is prohibited at school.

Although they have not drawn up a roadmap for implementing their proposals, the committee members have vowed to continue moving their agenda, said Ali of the Weingart Foundation.

The next steps will be to prioritize, build an organization and figure out how to pursue an inherently political advocacy, Ali said.