When Mandy Keathley started hiking the John Muir Trail, she expected the 200-mile journey to take about 18 days.

The 32-year-old had no plans for the summer. When she had a month off she thought it was the perfect time to spend a few weeks outdoors. She packed a 45 liter backpack with a tent, sleeping bag, stove, food, water filtration and clothes.

What she didn't expect was her solo hike going up in smoke and ending – about a week after it began – on a military helicopter Tuesday before dawn.

A photo of the Mammoth Pool Reservoir taken by hiker Alec Ziff. The creek fire clouded Ziff's journey, but he was rescued in time to celebrate his Labor Day birthday.

"That certainly never crossed my mind when I first hit the trail," said the Oakland resident.

Hundreds of people experienced similar surreal experiences trapped by the devastating creek fire in remote locations of the Sierra Nevada. The flame grew to more than 100,000 acres over Labor Day weekend, leaving hikers, campers and others stuck with no apparent way out.

"They could have turned around very easily and said the smoke made this mission too dangerous, but they went in anyway," Governor Gavin Newsom said at a briefing Tuesday. "You've saved many, many lives, and that's just one example of the kind of heroism that goes on right now."

Rescues began Saturday after the Creek fire, which ignited about six miles west on Friday night, jumped the San Joaquin River and ran to the Mammoth Pool Reservoir.

There Alec Ziff and a friend decided to celebrate Ziff's 26th birthday, which fell on Labor Day. That morning they woke up to smoke but thought it seemed far away in the distance. 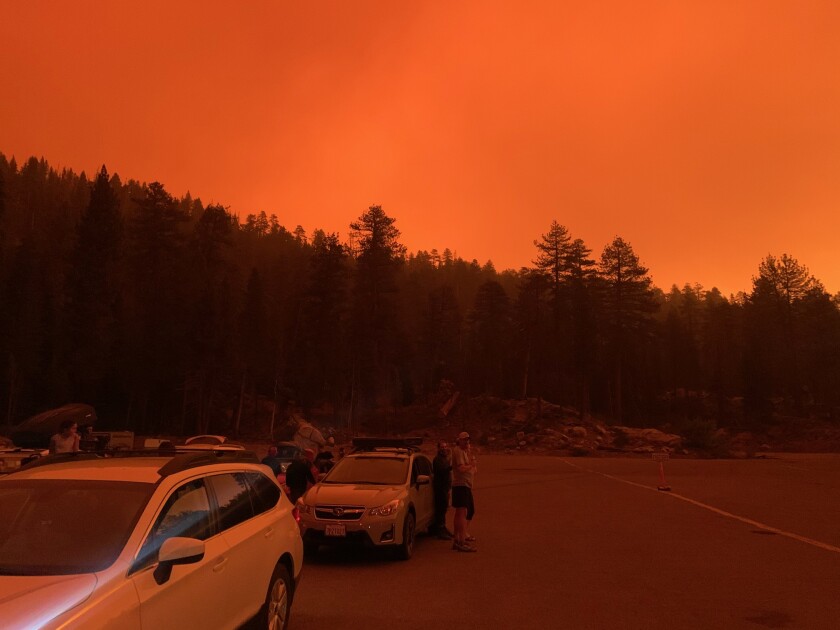 David Mau, who runs the kitchen at Vermilion Valley Resort, is waiting for a helicopter rescue on China Peak on Sunday. The California Highway Patrol eventually escorted him and other drivers out.

The two spent the morning kayaking and hiking before heading to Wagner's shop to buy ice cream. There they learned that the fire had gotten worse and they had to evacuate.

When they got back out on the lake, they saw flames on the top of the mountain amid malevolent swirling winds and smoke. The two paddled to get their tent and belongings before going back on the water.

In the lake, said Ziff, the waves reached five or six feet and finally pushed the kayak across. Ziff, who was carrying two backpacks full of clothes, got tangled in the tent they'd brought aboard and lost his grip on the kayak. He was pulled into the water.

"At the time, I didn't think I would make it," said Ziff. "I'm trying to get rid of everything and I can see fire all around me."

Eventually Ziff broke free and the couple reached the other side of the lake to wait with others. Hundreds of helicopter crews were rescued that night, but about 15 of them, including Ziff and his friend, stayed behind.

Those who stayed shared an oxygen tank and searched ice boxes for groceries. Cellular service shut down on Sunday and they were "essentially stranded," he said.

“At that moment I knew we were going to come out. I didn't care how we got out, I didn't care if it was the ATV or the helicopter or if they made a way for us to go up, ”said Ziff. "I just wanted out."

Ziff eventually drove his own car in a three-hour trailer toward Bass Lake. He and his friend were staying at a hotel in Oakhurst, celebrating Ziff's birthday with a few beers.

On Saturday, Juliana Park was out with a group of four friends in the mountains northeast of the Mammoth Pool Reservoir. They had planned the trip weeks in advance – each of them had been tested for COVID-19 beforehand – and wanted to take advantage of the long weekend.

"If we had known how bad the situation would be there, we would of course not have left the Bay Area," said the 24-year-old.

About an hour after the hike began on Saturday, the group heard thunder and took it as a sign to repent. They were hiking uphill and when they got to their car, "it was raining ash." The sky was a threatening orange.

As they drove, they met a woman – who they believe was a forest worker – who led them down the street with flashing red lights. She instructed them to drive through the fire on either side as this was their only way down.

Throughout the trip, Park kept telling her friend to just keep going. Park believes the flames they saw were part of a fire that may have been caused by lightning.

"We were really, really lucky," said Park, paying tribute to the woman who led them downstairs. "If we hadn't seen her maybe 10 minutes earlier, we wouldn't have been so lucky."

After starting her backpacking trip on Aug. 31, Keathley didn't see smoke until Saturday when she stopped at Vermilion Valley Resort, a humble stopover on Edison Lake, to refill her food. 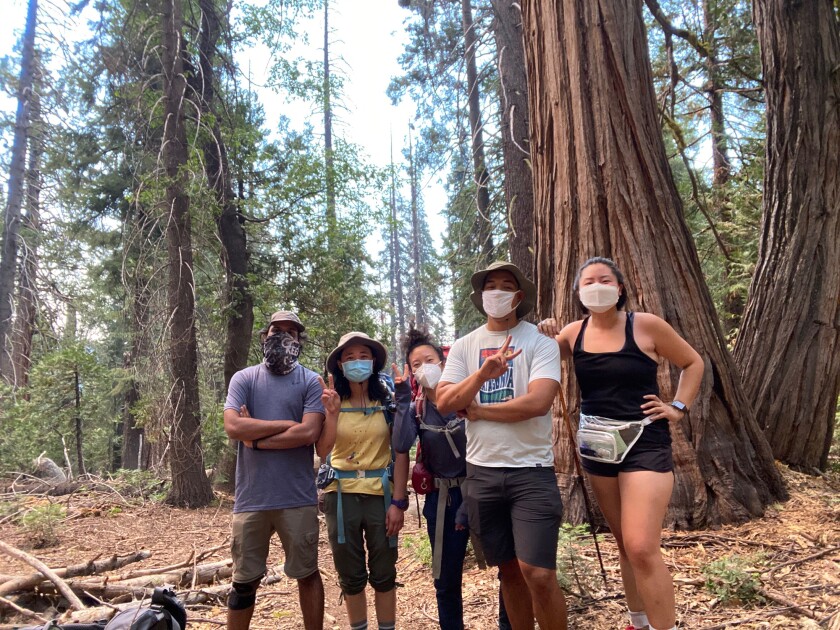 The fire on the creek stopped a hike from Juliana Park and her friends in the Sierra. She drove through flames, guided by what she thought was a forest worker.

Though it was "a bit scary," said Keathley, the fire still seemed quite a long way off. The next morning she decided to head out and try to drive south on the John Muir Trail in hopes of escaping the smoke.

But after nine miles the smoke didn't improve and Keathley tried to breathe. After learning that there were evacuations going on in Vermilion, she decided to turn back.

"I did not feel comfortable continuing on the path," she said. Other backpackers carried on.

About 50 people, including Keathley, sought refuge in Vermilion – where hikers on the John Muir and Pacific Crest trails recreate. The staff provided them with food and posted updates on social media.

Record heat. Angry fire. What are the solutions?

Get Boiling Point, our newsletter on Climate Change, the Environment and Building a More Sustainable California.

Occasionally you will receive promotional content from the Los Angeles Times.

David Mau, who runs the kitchen in Vermilion that summer, left after the wind changed Sunday and brought more smoke to the area. As he drove down towards Huntington Lake, he said, "It looked like lava, the whole valley was glowing."

"I've been up there for a quarter of a century and I've never seen anything like it," he said. The California Highway Patrol eventually escorted him and other drivers out.

Back in Vermilion, MPs arrived on Monday to help everyone exit, and the group began packing their bags and getting into cars. At the last minute they were told it was canceled as it was unsafe.

That night, the Fresno Fire Department said crews had attempted to reach people at Lake Edison and China Peak, but "rescue efforts were unsuccessful (as) military pilots valiantly attempted to land but heavy smoking conditions prevented a safe approach."

Many of them wouldn't be out until Tuesday. Keathley was one of eleven people who got on a helicopter to fly to Fresno at around 4:30 a.m.

“Some hikers asked me if I plan to continue on the trail when the situation calmed down. I just found the way is always there, ”said Keathley. “I had a nice week on the trail. It's not really what I was expecting and I would certainly have loved to finish if I had, but at that point I was really interested in getting out. I felt pretty trapped. "

The Times staffer, Taryn Luna, contributed to this report.